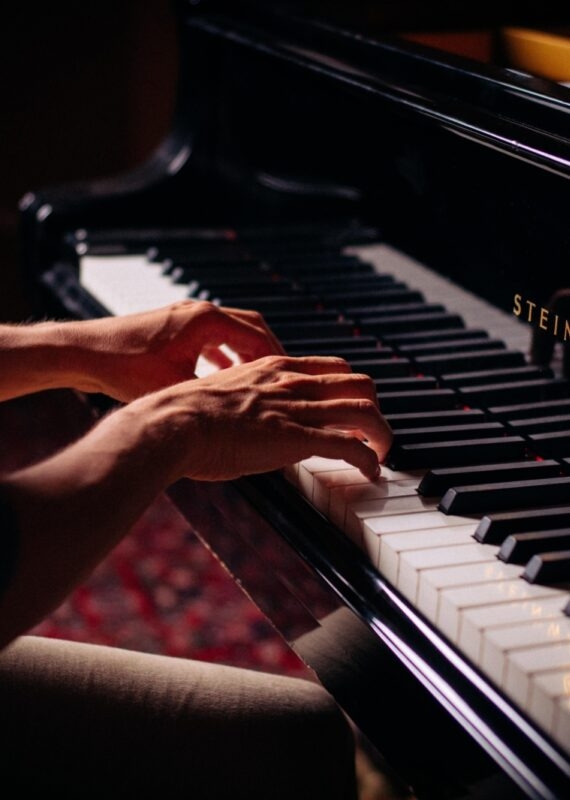 Andrew Leach’s mastery of the piano shines through on every project he works on.
listen now

As a child, Andrew was fascinated by watching his mother play the piano, so he asked her to teach him to play. Since then, Andrew’s love for music grew and grew as he discovered new genres like jazz and the blues, he bought his first bass guitar for just five pounds so he could play John Mayall songs with his friends.

Andrew began his formal piano studies at the Royal Academy of Music at the age of thirteen. He was still a pupil at school when he performed Schumann’s Piano Concerto with his school orchestra and Beethoven’s First Piano Concerto with the Southend Symphony Orchestra.

Andrew gained a music scholarship to King’s College, Cambridge, where he directed from the keyboard a performance of Mozart’s Piano Concerto in B flat, K. 450. Andrew has since performed Bartok’s Third Piano Concerto with the Wolsey Orchestra and Beethoven’s Third and Fourth Piano Concertos with Lavenham Sinfonia. Andrew enjoys playing chamber music and has accompanied professional singers and instrumentalists, including Jack Brymer.

At the beginning of 2022, Andrew started working with MediaTracks as a pianist for various projects whilst conducting his duties as chairman of Ipswich Chamber Music Society and organist at St Mary at the Elms Church in Ipswich. And when not immersed in the world of music, Andrew loves to cycle, go to the theatre and go for walks, especially up the Scottish hills.

He directs Woodbridge Choral Society, with whom he has given performances at Snape Maltings in recent years of Verdi's Requiem, Britten's War Requiem and Mendelssohn’s Elijah.

Andrew has enjoyed composing spiritual arrangements for amateur choirs. His most recent composition was the music, scored for a chamber ensemble, for Pilgrim, by Dominic Shea, a dramatised reading with music.